Scroll down to
view more

The movement of moisture beneath a building can produce the phenomenon known as long-term dome and saucer effect.

The dome effect is a slow heaving of the soil caused by movement of moisture from the perimeter of the house to its centre, and the saucer effect is moisture moving in the opposite direction, from the centre towards the perimeter. Extended periods of severe drought are likely to result in perimeter drying and the doming effect, while rehydration once the drought has broken, or during periods of extreme and persistent wet, are likely to result in the reverse saucer effect. Unfortunately, both actions may cause cracking.

The dome effect causes the walls to tilt outwards and the restraining influence of the roof produces horizontal cracks on the outside wall. These will be wider on the outside surface rather than the inner. 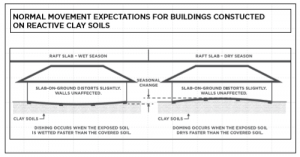 The long-term saucer effect causes the external walls to tilt inwards and partition walls to sag. Cracking may be like that seen with the dome effect but the width of the cracks will be greater on the internal surface of the walls.

The most economical solution and one which gives good results where damage is not too severe is to improve the sub-floor ventilation so that the atmospheric conditions under the floor and those outside are not too different.

It is worthwhile understanding that while impermeable paths or paving around a home can mitigate seasonal drying and saturation, after the cessation of extended periods of either condition they can also slow down the soil’s return to its ‘normal’ condition and reduce the benefits of supplementary perimeter watering.

Water extracted by trees and shrubs

The greatest damage occurs when trees are planted close to the building after construction.

Contrary to popular belief, it is rarely the growth or uplift of the taproots of big trees which disturb the foundations. The damage is done by the plant roots extracting considerable quantities of moisture from the soil, which reduces the volume of the soil, causing footings to subside in that area and cracks in the masonry to appear.

This phenomenon is known as tree drying settlement. The way it works is the tree takes water from the soil by a system of fine hair-like roots. The moisture is then transported to the trunk of the tree via the main tap roots. The astonishing fact is that, depending on the type and age of the tree, this fine root system can extend over several hundred metres, and the amount of water transpired daily by a tree can be several hundred litres.

A more commonly accepted formula is that a tree’s root system will extend for a horizontal distance equal to its height. In a line of trees, where competition for water exists, the horizontal root spread is one and half times the tree height.

Of course, if the water available in the soil is sufficient to meet the tree’s transpiration rate, no damage will occur. But a dry season, even in a temperate zone, can alter this balance.

Extended drought periods can significantly increase any effect. It is important to note that during prolonged periods of drought, particularly when these coincide with water restrictions, the foundation material around buildings can be exposed to persistent drying and shrinkage which may further exacerbate the potential for cracking.